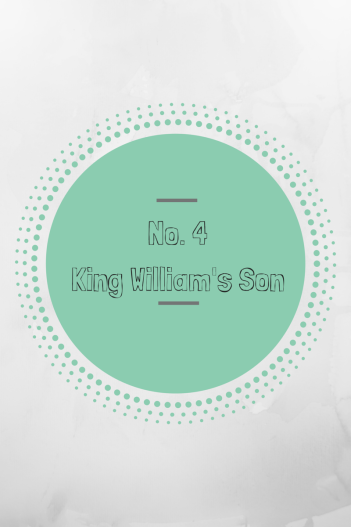 Despite being an accomplished composer, John Jacob Niles seldom used more than one instrument in his folk recordings. Instead, Niles relied upon the theatricality of his voice and simple strumming techniques to deftly convey complex characters and musical landscapes. Here, unwittingly, Jonathan and I have channeled this idea: our recording of “King William’s Son” contains only voice, banjo, bass recorder, and drum.

As a result, it is the story of the ballad that matters most.

There are many things to love about this ballad. The melodic line is haunting, unexpected, enchanting. It has been stuck in my head since first learning it. The story is commanding and complex. Lady Isabel is a heroine worthy of both admiration and pity, we share King William’s presumed shame for the ignominy of his first-born son, and we too wish that the parrot would desist by the song’s end (hasn’t Isabel had a rough enough night already?). The classic elements of the ballad are rich and varied and the specific lyrics of this version simultaneously bawdy and heroic.

This ballad is a version of “Lady Isabel and the Elf Knight.” In other versions of this song, it is not a human ruler (Prince Jamie) but instead an elf (this might explain the reference to Jamie’s ‘slender hips’). The story is as follows: an elf knight or lord of some sort seduces a young lady, especially by singing. He then leads her to the sea, where he reveals that he intends to kill her and steal all her possessions (including her clothing and thus, presumably, her virtue). Often, he explains that he has killed many other women in a similar way. Explaining that she doesn’t wish to be seen naked, Isabel asks the Knight to turn his back so that she can undress. She then throws him to the sea. The Knight begs to be saved at which point Isabel smartly refuses, citing the other maids’ deaths, and flees, leaving him to drown. When she returns home, she must contend with her parrot, who threatens to tell her father what has happened. The parrot is then bribed with the promise of a gold cage.

As with many other folk songs, “King William’s Son” resists a straightforward interpretation. There’s the title which seems misplaced: is Jamie the main figure of this song? He’s dead by verse 7. Other versions of the song have been titled “The King’s Daughter,” which seems more fitting. Why does the ballad begin with the mention of King William, whose character has been entirely dropped by the close of the song, replaced by Isabel’s father? The exchange between Isabel and the parrot at the end feels disjointed too, as if a new story is being tacked on.  For someone more accustomed to analyzing literature, folk songs and stories can prove a maddening puzzle, since often the significance of a line or character has been lost to a hundred years of repetition and retelling, much akin to a musical game of ‘telephone.’

Lady Isabel is a compelling heroine, but a problematic one too. She is crafty enough to trick Jamie once they’ve reached the sea. She is clever enough to refuse him when he promises to marry her and make her Queen in exchange for his rescue. Indeed, her response is so full of confidence and disdain that it is hard not to cheer with her, despite some gruesome imagery: “Soon the fish will eat your meat/ Instead of eating me.” She then rides home across the countryside, leading his horse along with her, arriving at the castle in a sweat. This is no damsel in distress.

But why has she followed him there to begin with? In some versions, the elf-knight uses enchantments, but in this more straightforward tale we are told only that Jamie was the worst of the King’s sons. His reputation seems well-known. The fact that she follows him does make her seem comparatively “silly.”

Then too, once she rids herself of Jamie and flees home victorious, she is essentially blackmailed by her parrot. It is more explicit in some versions, but I love the subtlety of this “poll” when he is asked to be quiet: though Isabel has not told him any details of her misadventure, he seems well aware and reveals how “The cat was at [his] cage’s door,/and [Isabel] shooed her away” (Ballad Book, pg 29). It is a clever enough metaphor, and Isabel feels proportionately threatened. The song closes with her bribe to the bird, a cage made of gold instead of wood: “Thy cage shall be made of beaten gold/
Instead of the willow tree” (29).   It’s hard not to feel these lines have something to do with Isabel too.

It is possible that in “King William’s Son” we are seeing a combination of the parrot in “Lady Isabel and the Elf-Knight” and his counterpart in another Child ballad, “Young Bunting.” In the former, the parrot aligns himself more with Lady Isabel; in the latter, the parrot sides more (and indeed seems to share the plight of) the murdered lover. The undertones of antagonism between Isabel and the parrot in “King William’s Son” seems to allude to his “Bunting” counterpart.  (For much, much more on these ideas, please read Barre Toelken’s “What the Parrot Tells us that Child Did Not” as found in The Folklore Historian: Vol. 14, especially pages 47-50, which I have drawn from here. Toelken discusses these ideas as well as the symbol of the parrot in a cage vs. the parrot atop a cage or let loose as representative of domesticity vs. sexual liberty. Toelken, of course, makes no reference to “King William’s Son” as it is an little-known variant).

It is a frustrating turn for Isabel’s audience that, while she has managed to keep her gold from Jamie, she now must cede it to the parrot. The Isabel of the last three verses feels tired and desperate, repeating lines and caving to demands.

Below are a few other versions of the ballad, including one of our own recorded years ago: “Pretty Polly.” In it, Isabel has become Polly, she is stripped of her agency, and is buried in a shallow grave. 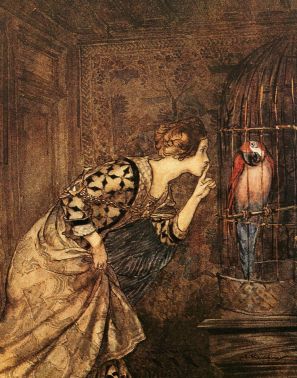 King William’s Son (Niles No. 4B) – Collected Summer 1936 from an elderly woman who wished to be unnamed, western North Carolina

He sang his song to Isabel,
A song like none did sing,
And she did follow him away,
A very silly thing.

They wandered over hill and dale,
They came upon the sea,
“Light down, light down, fair Isabel,
And give your clothes to me.”

“Hit’s turn, oh turn your head away,
And look at yonder sea.
I do not wish to have it said
I let you see my bare body.

“Oh turn, oh turn your head away,
Behold the yon seaside,
And do not look this way a bit
Or you’ll see me in my hide.”*

And as he stood a-waiting
And a-looking o’er the lea,
She grabbed him by his slender hips
And pitched him in the sea.

“Oh save me, save me from this death,
And when the King is dead,
I will be King Jamie
And you’ll be queen instead.”

“If you could lie to nine young maids,
You’ll lie as quick to me,
But soon the fish will eat your meat
Instead of eating me.”

She mounted quick the dapple gray,
And then she led the black
Across the fields and pastures,
A-homing she rode back.

“Where have you been and what have you done,
Your horse is all a-sweat?
Your father looked the castle o’er
And hasn’t found you yet.”

“If you would only hold your tongue,
You’ll never have to lie.
My father ne’er must ever know
How near I come to die.

“No talk, no talk, my pretty poll,
It be the break of day.”
“The cat was at my cage’s door,
And you shooed her away.”

“Well said, my parrot bird, well said,
No cat shall bother thee,
And thy cage shall be made of beaten gold
Instead of the willow tree.”

*In describing the elderly woman who sang him this ballad, Niles mentions that “In spite of all her troubles, she had a great sense of humor and was ready to laugh at almost everything, including herself… She used the word ‘hide’ in “King William’s Son” — possibly for the sake of rhyme, but more probably, I think, for humor’s sake” (Ballad Book, pg. 28) I love watching the singers’ personalities sneak into the ballad!